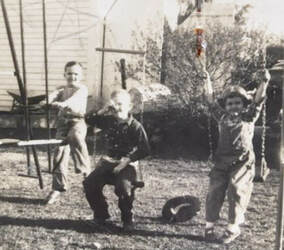 Brooks Avenue was an inconsequential place to call home.  Mc Michael’s Grocery, the Rexall drugstore, and a Texaco gas station were at one end of the street, and a bakery at the other.

Growing up in Atlanta during that post-war Baby Boom Era, ensured there was never a shortage of playmates.   Elaine Mc Michael, lived two houses from the end of the block.  She and I were in the same class, but we never became close friends.  Elaine was fond of hosting dress up pretend tea parties.  I preferred playing rough-and-tumble games with our neighbors Danny Crowe, Kerry Sartaine, and my brother Sandy. He and I were barely two years apart but looked enough alike that we were often mistaken for twins.

Sandy’s given name was Robert, the same as our mother’s father, but because of his blonde hair he was simply known as Sandy.  Our older brother  was named for our father and grandfather. Our baby sister was named for Melanie Wilkes, from Gone With the Wind. I wasn’t named for anybody. Like Brooks Avenue, I was just ordinary.

The ruthless sun could be merciless during those long, sweltering Atlanta summers. The hottest part of the day found the majority of the neighbor kids trading their arduous outdoor activities for a swaying porch swing, hoping to catch a refreshing, fleeting breeze. My refuge was being cradled in the cool, dark branches of an ancient, fragile peach tree.

The sweetest peaches were the ones that had fallen onto the hard Georgia red clay soil that stained clothes and skin alike. I gathered the ripest peaches, gingerly carrying my precious cargo, as I made my precarious climb up to my idyllic afternoon retreat. An effortless twist of the soft, fuzzy, pink orb released succulent, sticky, liquid gold that oozed down my arm and chin.

After the sun completed its western decent and the temperature diminished to an endurable level, Brooks Avenue again came alive with the sound of children playing beneath the city’s street lights. We played hide-n-seek, red rover, and tag, oblivious to time, until we each heard our fathers' whistle.

Every father on Brooks Avenue had his unique whistle which was recognizable by his offspring and nonnegotiable. Those whistles cut through the warm stagnant air like a scalpel, wordlessly telling each child it was time to stop playing and return home. 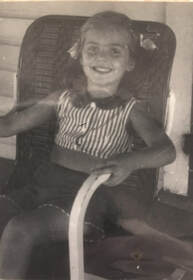