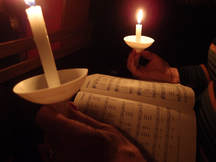 The Christmas carol, “Silent Night” has no definitive origin. Some accounts say it was a poem written in 1818 by an Austrian priest who asked a friend to compose an accompanying melody. Other legends tell of a broken organ with the priest and the composer singing the sweet, sacred song during a cold Christmas Eve Mass. Regardless of how the carol originated, its identifiable melody and words define the essence of Christmas.

I always found the beloved tune and humble lyrics beautiful, but I didn’t really appreciate their significance until one Christmas Eve, when we had a ‘Silent Night’ of our own.

Several years ago, I was married to the pastor of a small, rural Methodist church not too far from Buffalo. Christmas Eve services often bring a welcome calmness after a hectic month of shopping, cooking, parties, decorating, mailing cards, and wrapping gifts. The peacefulness of a church sanctuary, the soft music and ancient familiar stories about angels and shepherds give people a chance to reflect on the significance of the Holy Season.

One snowy Christmas Eve, I spent the afternoon in the church kitchen preparing a buffet the congregation would enjoy prior to the evening service. An hour before dinner time, just as I turned to preheat the ovens, we heard a loud boom and the lights abruptly went out. My husband and I scrambled to find flashlights and candles.

We quickly learned a nearby transformer had blown, and although crews were working to restore the power, there was no estimate on how long we would be without electricity. I looked around helplessly at the half dozen extension cords leading to hot plates, the Crock Pot, brimming with mulled cider, the dead coffee urns and two stoves, each proudly proclaiming “General Electric.”

Instead of bubbling away in a hot oven, my fruit compote and casseroles sat on the countertop getting progressively colder. I ran next door to the parsonage kitchen and grabbed a gallon of milk, the trays of Christmas cookies we had been given by our neighbors and as many packages of cheese and crackers as I could find.

The parishioners arrived promptly at 6:30, ready to enjoy a hot, home-cooked dinner. Instead, they found me scurrying around a dark, chilly fellowship hall filling trays with cold snacks. In place of hot cider, with its pungent cinnamon aroma, was a white plastic jug of milk and a squeeze bottle of chocolate syrup. To my surprise, no one was disappointed. We enjoyed our cold, little meal together as if it were a banquet. The time passed quickly with a lot of laughter and jokes about being in the dark.

Despite the darkness and chill of the sanctuary, the pews filled quickly. I recognized many of the candles hurriedly placed on the windowsills as scented ones I had purchased during after holiday clearance sales the previous year. The fragrances of ginger, citrus, and apples wafting from the candles permeated the sanctuary, lending a festive holiday spirit to the occasion.

The lyrics to old familiar carols were recalled, resounding with joy throughout the softly glowing church. Toward the end of the service, small white candles were distributed in preparation of the traditional singing of “Silent Night.”

Each person received the flame, then passed it on. The enchanting flickers illuminated the faces of every worshiper, revealing peacefulness and unity inside an old brick church on one snowy Christmas Eve.