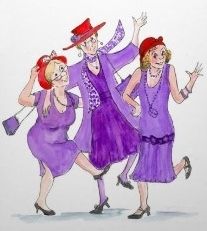 ​      The girls are decked out in their most flamboyant outfits. Sequins, garish makeup, false teeth, and fake eyelashes are a common sight among the group. High heels, a questionable choice in footwear for their age group, abound. Boas and sparkly bold jewelry adorn their brightly colored costumes and feathered headdresses.

Is this “Toddlers and Tiaras” the popular, yet controversial, kids’ beauty pageant reality show on The Learning Channel?  No! It’s the ladies of The Red Hat Society!

The Red Hat Society, founded in 1998, is an international social organization made up of women over the age of fifty. The purpose of the society, known as a “dis-organization” is to have fun. The underlying concept is that women over the age of fifty have spent a good portion of their lives taking care of others, and now it’s time for her to kick back, relax and enjoy life. The theme is “Just Don’t Do It!”

The official sport is shopping, the official musical instrument is the Kazoo, and the official slogan is “Eat Dessert First.” The attire, or uniform, is purple garb worn with a red hat; the more flamboyant the better. These colorful combinations identify the group and denote a unifying concept among its members.

Each chapter is created by an individual woman called "The Queen Mother."  The Red Hat Society has no rules, allowing each Queen Mother to decide how she wants to run her chapter. The ladies participate in numerous activities including traveling, dining out, pajama parties, attending concerts, plays, art exhibits, movies, tea parties, marching in parades, an annual convention, wine tastings, and an occasional Hoot.

A Red Hat Hoot is the Senior Lady equivalent of a Flash Mob; except, instead of synchronized  dancing to a prearranged song, they meet at a designated place for lunch and that all important endeavor ~ SHOPPING.

I learned about The Red Hat Society in 2003, and immediately started a chapter. The women who joined instantly formed a sisterhood, supporting one another and developing alliances that went beyond simple friendship.

Many of the ladies lived alone, dependent on neighbors and relatives for help with grocery shopping, routine errands, yard work, and being driven to necessary appointments. As they became more comfortable with the public attention we attracted, I routinely saw ladies whose lives had become stagnant, metamorphosize into vibrant, courageous, strong women passionate about life.

Encouraging each other as we grow older is vital part of this sorority. But it’s just as important to laugh together when we “Golden Girls” boldly step into the public spotlight displaying our aging bodies and gray hair. Occasionally, we sit alongside each other in church pews proudly flaunting our most extravagant purple regalia, and red hats as we say goodbye to one of our own.

I agree with Kansas journalist William Allen White (1868-1944) who wrote, “My advice to the women of America is to raise more hell and fewer dahlias.”

After all, Girls Just Wanna Have Fun.